The 60-Minute Thai Alphabet is based on a scientifically proven memorization technique that enables you to find connections between new information and things you already know.

Using this recall technique, you can learn the Thai alphabet today in record time!

The 60-Minute Thai Alphabet book helps you overcome the difficulty of learning an alphabet that is entirely alien to your brain. This technique has worked for over 25,000 people, and is something every single person has the capability to do. 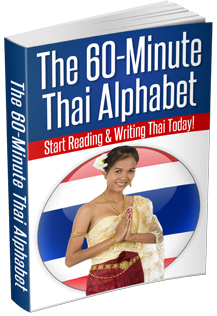 About the Thai Alphabet

There are 44 consonants  and 32 vowels in the Thai Alphabet. Many of the vowels are long and short versions of each other, so it is actually only necessary to learn 20 different vowel forms.

Now, I know what you’re thinking, “44 consonants and 32 vowels! I’m only used to 26 letters!” But don’t worry, you’re about to learn a technique that will help you effortlessly master the Thai alphabet.

Thai words are broken up into syllables formed by the consonants, with each syllable given a distinct tone. There are five tones you need to learn:

1. Low – spoken in the lower part of your voice register.
2. Middle – spoken in the middle part of your voice register.
3. High – said in the higher register, as if you are calling someone at a distance.
4. Falling – for example, like the word ‘no’ when saying “oh no” if you’re disappointed.
5. Rising – for example, like the word ‘coming’ when asking someone, “are you coming along?”.

The reason you need to know the class of a consonant is because the class affects how a syllable is pronounced. So you basically have to recall the sound and the class in order to learn the alphabet.

The rules for determining the tone of a syllable are given in the ‘Tones Section’ at the end of the book, but here’s a quick example to give you an idea of why you must learn the classes:

Example 1:
When a High Class consonant with the sound ‘S’ is followed by a dead-sound (i.e. a sound that ends quickly like at or an), the tone of the syllable is Low.

Example 2:
When a High Class consonant with the sound ‘S’ is followed by a longer, open sound (like an ‘m’ sound) the tone of the syllable is a Rising.

It might seem somewhat complicated, but once you master the Thai letters and classes with the special technique we’ll discuss below, it’ll be easy-peasy!

Some Thai letters have different sounds, depending on whether the letter appears at the start or the end of the syllable. By using the memory technique, you’ll quickly master three things:

As humans with advanced brains, we are constantly making associations with people, events and places that merge into the sub-conscious, only to reemerge when we encounter them again.

You’ve never encountered the Thai alphabet before; it wasn’t drilled into your brain as a child. But the western alphabet was, and so were millions of other images and words, things that that can help you recreate leverage points and subsequent connections with the Thai alphabet.

And that’s what The 60-Minute Thai alphabet book does for you.  You’ll have an automatic connection for every letter, shaving months off the learning process.

The book uses  illustrations to trigger common associations in the brain. For example, take a look at the Thai letter below on the left, and notice how it resembles the image to its right: 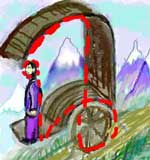 This Thai consonant is named ‘Chor Ching’. In the illustration it is represented by a chariot  driving through a High Mountainous Terrain. The similarity between the two is highlighted by the dashed red-line in the image. This image encodes all the information that you need to recall when you see Chor Ching (the Thai letter).

1. The sound is Ch (chariot), when at the start of a syllable
2. Its class is High, symbolised by the mountainous terrain in the background

The book helps you memorize the classes by using three different types of backgrounds:

Simple, logical and easy to learn!

How it works in Practice:

1. You see the Thai letter and your brain associates it with the image you’ve learned.

2. The name of the Thai letter springs to mind because of the shape and sound.

3. The background image tells you the letter (consonant’s) class.

It’s so easy, and extremely effective! Have another go:

In the Thai alphabet Thor Puu Thao (Puu Thao means old man) is represented by an old man. However, in our illustration you see a guy training with a dumbbell on Venice Beach:

1. The outline of the man with the dumbbell helps you recall the shape.
2. The sound is ‘T’ for training.
3. The class is low because he is at the seaside.

Learning the Thai Alphabet doesn’t get any easier than this!

Within 60 minutes you’ll be writing letters and reading words! What’s more, we’ve thrown the Thai number system in there for you too, which very few foreigners ever learn. The book downloads in PDF format, so you can learn on any digital device, including all smartphones and tablet devices. Download your copy for just $19.99 using the secure Buy Now button below.

Some Learning Tips To Get You Started