I’m going to give you all the resources you need to learn the Thai alphabet really fast. I’ll be your Kru, which means teacher in Thai. You can call me Khun Kru Fon. 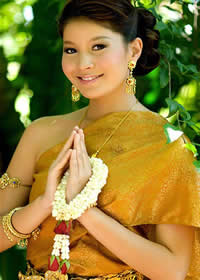 At first glance I know it looks hard. The Thai alphabet has a completely different script to the English alphabet.

But like anything in life, the sooner you get started, the faster you’ll learn.

The script is derived from Pali, Sanskrit Old Khmer script, and tradition says that it was created by King Ramkhamhaeng the Great (พ่อขุนรามคำแหงมหาราช) in 1283.

It is read left to right, with vowels sitting on top and below consonants.  The alphabet also has 5 tones to learn: low, mid, high, falling, rising. The ‘mid’ tone has no tone mark, so essentially there are 4 to identify.

Thai is a tonal language. The tones correlate with the vowels and indicated in the script by a combination of the class of the initial consonant (high, mid or low), vowel length (long or short), closing consonant  (dead or live) and, if indicated, one of four tone marks.

There are a couple of rules to bear in mind when learning to read or write Thai. Firstly, Thai language does not use lower case or capital letters. Secondly, there are no spaces and little punctuation.

This is perhaps the hardest thing to get to grips with because it is in direct contrast to what you’re used to. However, once you immerse yourself in the Thai Alphabet day-in-day-out you’ll soon become used to its form.

Each Thai consonant is associated with a Thai word to help with learning.  For example, ข is kho khai (ข ไข่), in which kho is the sound it represents, and khai (ไข่) is a word that starts with the same sound and means “egg”.

Two consonants still included in the alphabet, but no longer in use, are ฃ (kho khuat) and ฅ (kho khon).

These still appear on some keyboards and in character sets but have been officially dropped from writing. The reason is primarily because of the fact that when Edwin Hunter McFarland developed the first Thai typewriter in 1892, there simply wasn’t enough space for all characters, and so it was decided to leave these two out.

You can start learning the Thai consonants here.

There are 32 vowels in the Thai alphabet, but only 30 are in use. Vowels are split into three groups: singular (18 vowels), compound (6)  consonant-like (8). Vowels are pronounced either long or short.

Many of the vowels cannot stand alone to be pronounced and so these vowels are featured with the consonant “or aang”, which is a special letter because it can be both a consonant and a vowel.

You can start learning the Thai vowels here.

I hope you enjoy my site.